Fred and Nora Bundock
Remembered here by their daughter Carol.
My parents got married in St Clements in the 50s, it was so nice just to be in there today. Sadly my father Frederick Henry Bundock passed away at the young age of 47 in 1977, my mother (Nora May Swann maiden name) is deceased too, she died in February 1996. They got married on the 27th June 1953. My mother lived in West Thurrock Mill Lane all her life, they then moved to Tilbury in 1961 the year I was born. The St Clements Church holds a special memory to me, it makes me feel close to them when I visit. Here is a photograph of the happy couple on their wedding day. 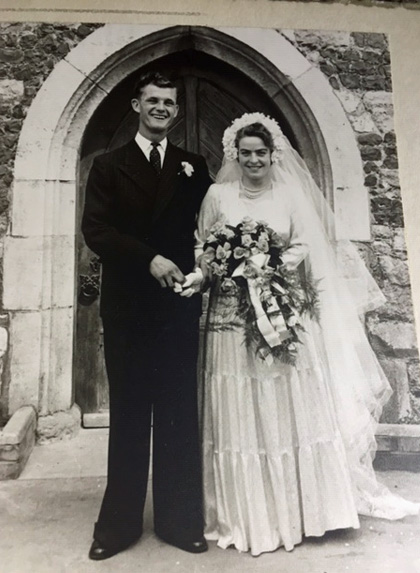 A New Christening At St Clements
On Sunday, 28th October, 2018, little Kayla Lange, from Germany, was Christened in St.Clement's Church, by Father Tim of Tilbury. Her grandmother, formerly Iris Wade of West Thurrock, was married in St.Clements's in the 1960's to Jurgen Lange of Heidelberg. Iris, now 80, and her 3 children, Kristina (Kayla's mum), Natasha and Dieter all attended the christening. Dieter's son and 2 girl cousins were also christened in St.Clement's a few years previous. A family enjoying going back to their routes and making new memories!
Many Thanks to Ira Gill for the write up & pictures. 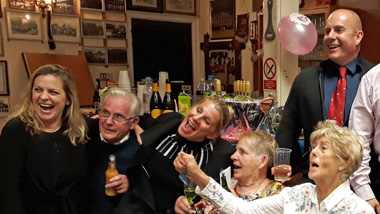 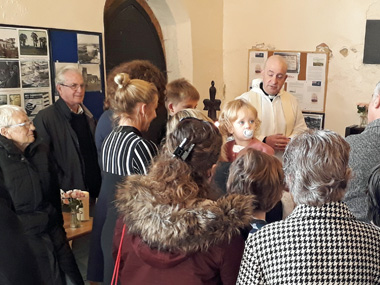 Alan Edward Wood was born 1931 in Hornchurch. His wife Brenda Joyce Wood nee Murray was born 1937 and died in 2012. Her place of birth was South Stifford until she was two years old, then she lived in West Thurrock. My connection goes back to the years 1938-39 when I was seven and eight years old. My grandfather who lived in Aveley used to walk me around Aveley, Purfleet and West Thurrock areas. He was a very knowledgeable gentleman on many things, one of which was St Clements Church, he remembered the disaster of 1915 when the boys and their commanding office of the Training Ship Cornwall and took me to their grave. The 2nd World War came in September 1939 and that put a stop to our rambles. It was in early 1953 when I was a British Railways Signalman at West Thurrock Sidings Box that I met a local girl, Brenda who was to change my life forever. We fell in love almost at once, we courted for two years, of which for one, we were engaged and married on the 5th March 1955 at St Clements Church by Eric Hedley Holliday the Vicar; it was his last year in office. 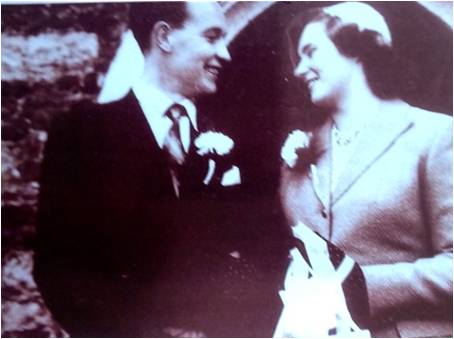 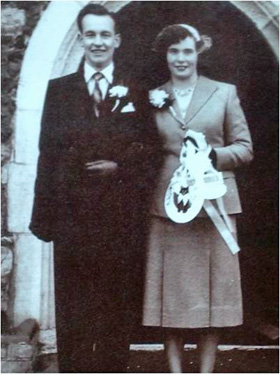 We were blessed with three sons and two daughters, and our marriage was to last 57 years when sadly Brenda passed away in 2012 aged 75 years. We never really lost touch with the church. As a young local girl, Brenda attended St Clements Sunday School and she was in the choir just like her mother and aunts had been before her. It was early 1969 when we moved from Elm Park to West Thurrock. This was to change our lives over the next 18 years. Our children were all of school age and to put it in a nutshell we all grew up together there. Therefore like their mother, Grandmother, Great Grandmother and Aunts before them our two daughters attended Sunday school and Choir. Brenda and I celebrated our 25 wedding Anniversary in the Church Hall. After eighteen years bringing up a family we moved to Hornchurch to care for my widowed mother, but it does not end there. Brenda and I have tried to visit the church on our anniversaries. The last time we visited together was for our 51st ten years ago in 2006 when our family also joined us. In 1993 we moved to Canvey Island and with the help of our son Jeffrey we planned a visit on our 60th. Sadly this was not to be, as Brenda passed away, but I visited with my family in her memory. On March 2nd I shall be 85 years old (Brenda's birthday was the same week 27 February) and once again looking forward to a visit with my family on February 28th in memory of Brenda. It would have been our 61st Anniversary and Brenda's 79th birthday.

Picture below Alan & Brenda on their 51st anniversary

Below Alan at the church door in 2015 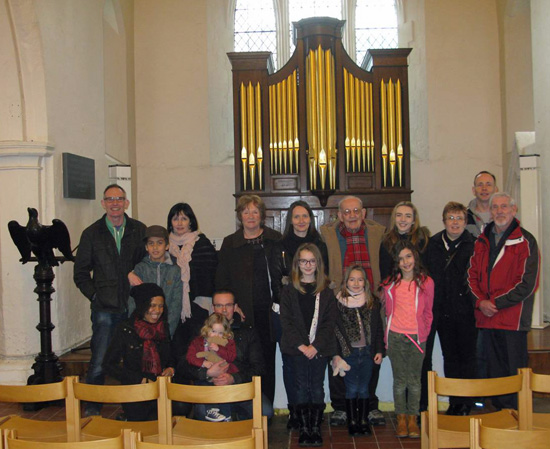 After reading about our article regarding the fatal sailing accident from the TS Cornwall, Wendy Small contacted us to tell us about her great uncle Harry Lee who died in the 1915 accident on the Thames. Harry was sent to TS Cornwall for larceny. He was sentenced on the 7th April 1914 at Tottenham. From the Court Logs it looks like he was going to be sent to Wandsworth Prison, this was crossed out and in very small writing above it is written Training Ship Cornwall and below is written Father to pay 1/6 (about 8p) per week. So Harry's dad was actually paying for him to be there. Harry was charged on his own confession with stealing from an unknown shop near Old Ford Road Bow East. The sentence was for stealing 7pence farthing (about 3p) in bronze and 3 packets of cigarettes. He was caught stealing the money from a shop in Stoke Newington but the proprietor of the shop would not charge him, it was stated that there was no prosecutor and all efforts to trace the shop where he stole the cigarettes had failed, He was bound over at Stoke Newington Court but to date no details of the court hearing can be found. This is the original letter from Harry to his parents while he was on the TS Cornwall, below it is a transcript of the letter. 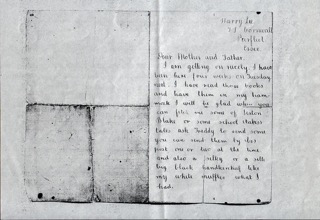 In the letter Harry talks about Dolly, who is Wendy's Nan (Dolly's picture is shown below) and the baby is her aunt Elsie. Freddie was his elder brother. His family thought of him as the black sheep of the family and they did not talk about him. But you can see from his letter that Harry was clearly intelligent and enjoyed his school work and reading and his hand writing is very good. 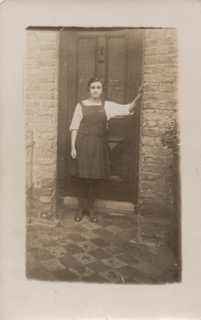 Dear Mother and Father
I am getting on nicely I have been here four weeks on Tuesday next. I have read those books and have them in my hammock I will be glad when you can fetch me some of Sexton Blake or some school tasks. Ask Freddy to send some you can send them by post one or two at a time and also a silky or a big black handkerchief like my white muffler what I had. Ask Freddy when he comes up to the garrison to come and have a look at the Cornwall. Next August I shall be able to come home on leave for eleven days. I am going to ask the officer if I can go running and the best runners go to Tuftnel Park. I have nearly learnt my compass. Will you come over again and see me. Ask Freddy to mend my bicycle and come over with you. I Hope the baby is alright and Dolly, I suppose she knows where I am. I have seen the Arethusa Training ship a little way down the river, when we went out in that boat I showed you. We might go out tonight Thursday April 30th 1914. I shall be able to go on land in another four weeks time. Wednesday afternoon the Cornwall cricket boys played the garrison and the Cornwall boys won the match. Will you send some stamps and envelopes

Harry died along with 15 of his mates in the sailing accident on August 30th 1915 and is buried in a mass grave with them in St Clements churchyard but sadly his name is incorrect on the headstone being Henry instead of Harry the name on his birth certificate.


The Heie's Brasses
The Heies (pronounced Hays) brasses Father, Son, Daughter were returned to St Clements after nearly 40years.
The brasses depicting church patrons from the 16 century of Sir Humphrey Heies died1584, his son Humphrey Heies died 1585 and his daughter Katherine Redinge died 1591, went missing from the church in the period between 1979 &1987.
1987 was the year Procter & Gamble took responsibility for the church (see below on this page), as part of the restoration facsimiles of the brasses were commissioned from Mr PM Hutchings. in May 1990 the facsimile effigies were completed and reinstalled to their original position.
In 2014 an unexpected e-mail arrived from an antiques dealer explaining that he had bought the original missing brasses in good faith from a dealer in Germany who had bought them in America some years before. On discovering they were stolen from St Clements in the 1970s he offered to donate them for reinstallation in the church.
Two St Clements team members duly collected the effigies from the dealer and they now can be viewed on display in the church.

The upkeep and church events are administrated for Procter & Gamble by a team consisting of P&G associates.


The grass, cut by scythe dries, turns to Heie (hay)
And afterwards to dust, so follow they.
All flesh is grass, Death cuts, and this again
Will turn to Heie, and then as dust remain.
Let Humphrey Heie the truth of this confess,
Who gets his name of Heie, omitting S.
How well the Heie in fact, and Heie in name
Agree. Let scripture tell, there both the same.
To poor thou was as grass and food, on earth,
From Heie to grass will be thy coming birth;
For when God bids this dust to rise, thoult
Be not Heie but grass and flower eternally


A Brief History of St Clements

A church has occupied the site in West Thurrock since pre-conquest days.The first church close to the river would have been on the strip of gravel which the present day church stands.There was no sea wall or river bank as we know it today.
There is a connection to St Mary's church in Hastings when in 1069 Robert Count of Eu was given the Manor of West Thurrock and Hastings.In Hastings he built the church of St Mary.From then to the Reformation all the rectors of St Clement's were from the college at Hastings.

In the early twelfth century the church existed with a circular tower serving as the nave. In the early thirteenth century the building was widened with north and south aisles built on either side of the rectangular chancel and by the late thirteenth century the building had been extended with a new chancel; the existing chancel became the nave, and north and south chapels were added. The chancel's eastern wall was later demolished and moved to its present position.

In 1940 Procter & Gamble began production at a new plant neighbouring the church and would later hold the historic building's future in its hands. In 1950 the church's flat roofs had to be repaired once more after the lead lining was stolen. Three years later more roof work was completed when the building tiles were replaced. The tower and north chapel were also repaired at this time

In 1960 the church was given a Grade I listed building status. However, in 1977 regular services had to be stopped due to cold and damp conditions during the winter. Shortly afterwards the church was used for a scheme for young unemployed people, called the Ark project. The project failed after a few years and the building fell into decay and was vandalised. 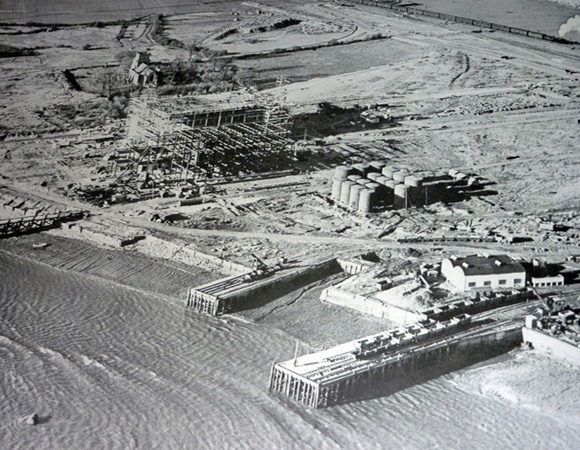 Procter & Gamble, whose factory now dominates the church's skyline, offered to take responsibility for the church and churchyard in 1987 when the company celebrated its 150th anniversary. Three years later, 50 years after the factory opened, the church's restoration was complete.